As we enter the month of July, riders get side-tracked watching Wimbledon, the Fifa World Cup or even the Tour de France, but not the Ystwyth CC time-trialists! With a slight change in the weather and the sun disappearing behind the clouds, round 14 saw 18 riders register for the Llety Gwyn 10 mile time trial which proved to be a fast night with many riders setting new personal best times.

In the women’s event, Anita Saycell took the win in a time of 25min 47sec. Second place went to an up and coming younger rider Lowri Richards, in a time of 27min and 57sec, and third place to Katie Miles in a time of 28min 45sec following her win the day before on the Caron Cycling Club 10 mile course.

Next week the event returns to the Cwm Rheidol course with a start time of 7:00pm. 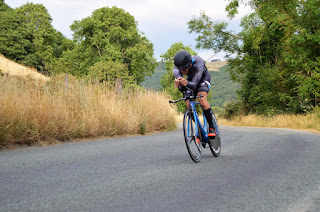 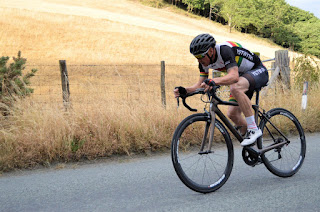 Arwel Jones on his way to a new personal best and a win in the road bike category (photo credit: Aled Richards)