Ieaun Andy Davies takes the win in the men’s event with Anita Saycell continuing to dominate in the women’s event.

With England taking on Croatia in the semi-final of the FIFA World cup, it would be interesting to see where loyalties would be stretched with round 15 of the TT series taking place.  Back in 1990, at Italia ’90, England took on the might of West Germany, for our more junior members of the club, the country doesn’t even exist today! How technology in relation to bikes has developed since then. In 1990, you would have expected to see a rider roll up to the start line on a Raleigh Vitesse 14 speed with down tube shifters and maybe even a set of top bar brakes, very different from the modern day technology of Aero frames and deep rimmed wheels.   1990 also saw Greg LeMond win Le Tour… who will be the winner by the end of this year’s tour????

With the fine weather continuing, round 15 saw 13 riders register for the Cwm Rheidol 10 mile time trial.

In the men’s event, Ieuan Andy Davies took the win in a time of 22min 29sec setting a new age course record.  Second place went to Glyn Williams in a new personal best time of 24min 59sec, and third place to Paul Jones in a time of 25min 24sec.

In the women’s event, Anita Saycell took the win in a time of 26min. Second place went to Helen Marshall in a time of 27min and 9sec, and third place to Lowri Richards on a road bike in a time of 28min 42sec.

Good to see Layla and Leif Skot returning for the 2 up TT in a time of 29min 08sec.

Next week the event returns to the Llety Gwyn course with a start time of 7pm.  With only 8 TT’s left, the need for speed continues……. 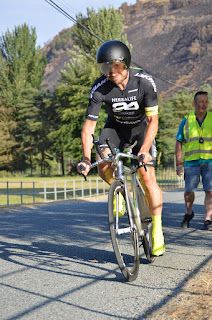 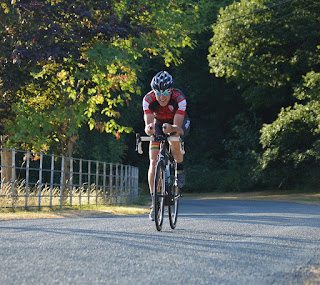 Glyn Williams on his way to a podium finish in a new personal best time 24.59 (photo credit: Aled Richards) 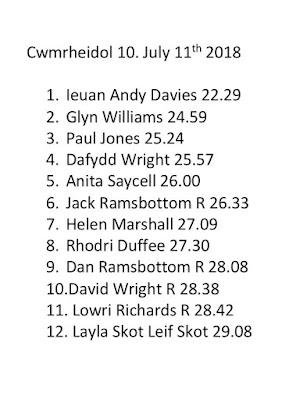