On a mild spring evening the Ystwyth CC time trial returned to the Llety Gwyn course to see 19 riders testing themselves on the 10 mile route.  With mild conditions it was going to be a good night for setting personal best times for the season.

In the men’s road bike category (no tri bars) this was closely contested with Jeff Saycell taking the win in an impressive 24.46, closely followed by Wayne Maguire in 25.11 and David Wright taking third place on the evening in 29.41.

In the women’s road bike category Katie Miles stormed home with the win in 28.46 and in doing so set herself a new personal best time.  Elaine Rowlands took second place in 31.00 and in doing this set a new club V50 ladies record! In third place was Lainy Harrison setting a course personal best time in 33.11.

The overall men’s win went to Dewi Hughes, making an impressive return to the TT scene in 24.04, followed closely by Caron Pugh only 2 seconds behind in 24.06, and third place went to a very strong young rider Dafydd Wright in 24.16.

Thanks to Andy H, Derek and Scott T for helping on the evening.

Next week the time trial heads to a different course starting at Nant yr Arian at 6.30pm.  More details on the club TT page:  https://www.bc-clubs.co.uk/ystwythcc/index.php/time-trials/ 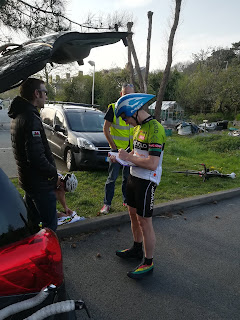 Dewi Hughes signing on before taking the overall win