The second event of the weekly series, saw 19 riders sign on for the start of the 10 mile time trial held on the Cwm Rheidol course.  There were many riding their first time trial and setting brand new personal best times for their first 10 mile event, alongside riders returning from last year to test their form for the 2019 season.

With the promise of tea, coffee and cake, Steffan Roberts was the fastest man home in 24.07, followed closely by a fantastic ride from junior rider Dafydd Wright in 24.22 and hot on his heels, Henry Moss in 24.25 who also claimed the mens road bike (no tri bars) win on the evening.

In the women’s event, Anita Saycell took the win in 26.37, with up and coming junior rider Lowri Richards taking second place in 28.24 and also taking the overall women’s road bike win.  Lowri was closely followed by Katie Miles taking third place in 29.40 and setting a new personal best time in the process.

The time trial route next week returns to Llety Gwyn with a later start time of 7pm.  If you are interested in having a go take a look at the time trial page on the club website: https://www.bc-clubs.co.uk/ystwythcc/index.php/time-trials/ .

A thank you from all the riders to Andy H, Derek, Andy D and Nia R for their help on the night making the event possible. 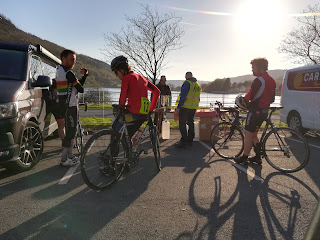 The start of the Cwm Rheidol event