Skip to content
Ystwyth CC members, including lifetime members Ken Williams, Glyn Evans and Leif Skot, came together on Friday, November 10 for a special 65th anniversary dinner at the Blac in Talybont. We were also joined by Joe Hayward and Shelley Childs, representing the club’s two sponsors, Summit Cycles and Cambrian Tyres/Continental.
As well as thanking our sponsors and all our lifetime members, and noting the busy programme of events throughout 2017 to celebrate our 65th anniversary, club chairman Tim Johnson announced the following awards and presented the trophies for the 2017 season:
Men’s TT League – Ieuan Andy Davies
Women’s TT League – Lois Brewer
Handicap TT League – Andy Hamilton
Hill Climb – Andrew Poole
Hilly Time Trial – Gruff Lewis
Club Road Race award – Ieuan Andy Davies
One final award was voted for by all those present at the dinner, with the award for Club Person of the Year being presented to Anita Saycell. The club will look forward to presenting their trophies to Andrew Poole and Lois Brewer at a later date, and Tim also expressed the club’s best wishes for a swift recovery to Lois following her recent injury.
The evening also included a grand raffle, and the club would like to thank all those who donated prizes for their generosity. The raffle raised £250 for the club. The wonderful meal at the Blac was finished off with a special 65th anniversary cake.
As a club we hope that everyone enjoyed their evening and we’ll look forward to seeing you at the 2018 club dinner! 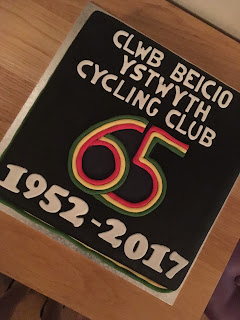 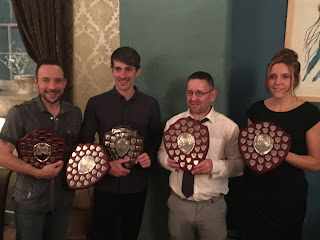