Skip to content
As Ystwyth CC’s 65th anniversary year draws to a close, a special commemorative window display of past club jerseys and photographs from the club archive can be seen at club sponsor Summit Cycles during the month of November.
According to Joe Hayward, director of Summit Cycles Ltd, “As a lifelong cyclist and advocate of all aspects of cycling, I’m extremely proud that Summit Cycles has been able to showcase some of Ystwyth Cycling Club’s rich 65-year history in this anniversary display. Summit Cycles are proud to support such a successful, diverse and inclusive club and we very much look forward to the next chapter in the club’s history.”
The jersey collection has been collected and carefully kept over the years by Ystwyth CC lifetime member Ken Williams, and was photographed by club member Kristian Bond, whose grandparents, Bill and Audrey Rushton, were among the earliest members of the club back in 1952. For them, cycling was always a huge part of family life, according to Kristian: “Bill had been cycling ever since Mam-gu (Audrey) knew him, so she started too. Not many people had cars back then, so it was another way to get around.
“Growing up, whenever there was professional cycling on the TV, there’d be many talks of ‘the good old days’ to follow. It’s great to have been brought up in a family that has such strong ties with Clwb Beicio Ystwyth since the early days, and who have seen cycling, in every respect, change – hopefully for the better: including lighter frames, better components and the ease of driving to races, instead of having to ride there the night before.”
Ken Williams first wore the Ystwyth jersey as a junior in a race organised by Deeside Olympic CC on a course between Queensferry and Chester in 1963. He went on to become a key member of the club, and remains active with Ystwyth CC and Welsh Cycling to this day, as does Glyn Evans, who joined in 1958 in order to ride the weekly 10-mile TTs. According to Glyn, “I then decided to give road racing a go, and finished 20th in my first race, which was the Deeside road race in 1959.”
Glyn went on to become the first organiser of the Ystwyth cycling weekend, with Ken acting as organiser for a further 25 years. The event consisted of two races: the Aberystwyth Evening Kermesse, which was a closed-road race in the town centre, starting and finishing on the south side of Castle Point, and the 80-mile Tour of Mid Wales, taking in Machynlleth, Carno, Caersws and Llangurig before finishing in the harbour. “The event was so popular that many British internationals would enter,” Ken remembers.
Ystwyth CC goes from strength to strength, supported by its other main sponsor Continental/Cambrian Tyres, and currently has 170 adult members. The popular Junior section, run by Chris Jones, Gareth Lewis and team, was only established around 18 months ago but is already making an impression in several cycling disciplines, including cyclocross and road racing.
Both Glyn and Ken are pleased to see the club thriving. “In the 60s and 70s we never had more than ten members,” says Ken. “We had to hold two jumble sales a year to keep the club afloat, otherwise it would have folded.” And Glyn added, “After all these years, it’s good to be able to still be involved with the club, and with cycling in general.” 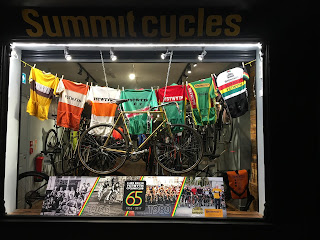