With the club time trial returning this week to the Llety Gwyn course, originally named after a nearby hotel, now a housing estate in Llanbadarn, 15 riders lined up for the start of this 10 mile event.

With the riders setting off at minute intervals to test themselves against the clock on this faster course, it proved to be a good night for personal best times despite the north westerly cross winds.

Wayne Maguire took the road bike win with a storming ride, crossing the line in 25.49, Owen Thomas following into second place with a swift 27.48 and David Wright taking the third podium spot in 30.27.

The women’s road bike win went to Elaine Rowlands in 31.09, with Lainy Harrison in second place on the night in 32.41.

The overall men’s win saw Steffan Roberts dipping under the 24 minutes this season, finishing in 23.41, with Caron Pugh hot on his wheels and only 8 seconds behind with a new personal best of 23.49.  Young rider Dafydd Wright had another fantastic ride to take third place in 24.41.

The overall women’s win went to Anita Saycell in 26.27, with second place and riding her first TT of the year, Helen Marshall crossing the line with a strong ride in 27.11 and Elaine Rowlands in third place in 31.09.

Next week riders are welcome to test out their baking skills as the course returns to Cwm Rheidol, with tea, coffee and cakes at the finish.

Huge thanks as always to Andy H, Derek and Scott T.  in giving up their time and making the event possible. 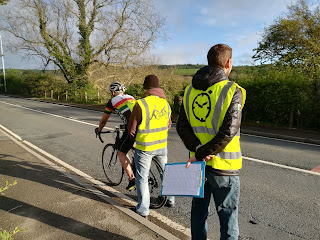