What a week, Cardiff City promoted to the Premiership, Aston Villa in the play offs and Swansea City relegated to the Championship. Cycling fans also took delight in Simon Yates’ dazzling display at the Giro d’Italia.  27 riders signed on for round 7 of the Ystwyth CC Time Trial series.  With the promise of dry roads and a light north easterly wind, conditions would be deemed average for the fastest course in the club calendar.

With 2 weeks to go until the Aberystwyth CycleFest, many riders are using the TT’s and the Tuesday and Thursday chaingang events to fine tune their top end speed and bike skills for the dream of getting a successful break away in the criterium races.

In the men’s event, local Pro Rider Gruff Lewis dominated and took the win in a time of 21min 43sec.  In second place, Ieuan Andy Davies continues to show good form with a time of 22min 52sec.  Third place went to Steffan Roberts with a strong ride to a timeof 23min 08sec.

In the two up event, Leif and Layla Skot continue to show good form in a time of 28min 30sec.

Next week, the 23rd May, the riders return to the Cwm Rheidol course before taking on the challenge of the Devils Bridge Hilly TT course at the end of the month. 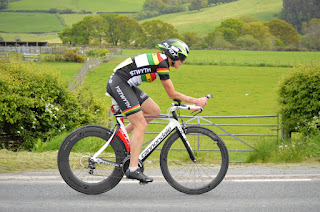