Skip to content
Three Ystwyth CC members, Dylan Lewis, Shelley Childs and Andrew Poole, have been training hard and competing with great success, and have all qualified for the European Championships in Ibiza later this year. Dylan will be competing in the European Off Road Duathlon Championships, Shelley in the European Standard Distance Duathlon Championships and Andrew Poole in the European Half Ironman Championships.
They will all be representing the British team for their respective age groups, which is fantastic!
Duathlons usually involve a run, a cycle and then another run, with the transitions being timed and included as part of the race, and triathlons involve a swim, a cycle and finish with a run. Duathlons and triathlons are held all over the UK, they can be on or off road and of varying distances. If you fancy trying an event check out the British Triathlon events page: https://www.britishtriathlon.org/events/search
The club would like to wish Dylan, Shelley and Andrew good luck with their training leading up to their events. You can follow their progress on Twitter @three_gb and on Instagram (three_gb). 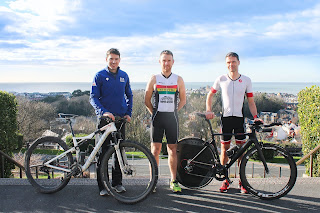