As club members drew back their curtains in the morning, they would have witnessed heavy rain and a strong westerly wind.  The prospect of a nice warm TT was far from the truth. Roll forward 12 hours and the sun graced us with its presence, although the cold westerly wind and cool temperatures were still present.

23 riders signed on to round 5 of the Ystwyth CC time trial series.  Expertly marshalled by Andy Hunt and his team.  As we enter the month of May, many riders are using the TT’s as extra speed training, ideal for mimicking a break away in a road race or just trying to get one over their buddy at a sportive.

In the men’s event, Ieuan Andy Davies, continues to dominate with a strong performance taking the podium spot in 23min and 18sec. This was followed in a time of 23min and 25sec by Danny Thorogood. Third place went to the Steffan Roberts in 24min 3sec.

In the women’s event, on the back of  the Wyre Forest Road Race, Anita Saycell took 1st place in a time of 26min and 26sec. Second went to Helen Marshall in 26min and 56sec and third place went to a junior rider, Lowri Richards, on a road bike in a fantastic 28min and 16sec.

In the popular road bike category, Ciaran Rowett took the top spot in a time of 24min 21sec closely followed by Jeff Saycell on his Watt bike in 24min and 25 sec. Pete Jenkins took third place in 27min 31sec.

Again, a huge thanks to riders and marshals for making the event another success.  Next week, the course returns to the Statkraft course, sign on 6.15pm with the first rider off at 7pm. 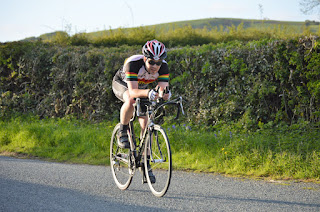