With excitement and anticipation of two local pro riders, Stevie Williams (SEG Racing Academy) and Gruff Lewis (Madison Genesis) on the start sheet riding as a two up, the expectation and pressure of a fast time was laid down on the tarmac from the start.  The two riders didn’t disappoint, with an excellent two-up time of  21min and 22 sec on road bikes, taking the fastest time on the evening.

In the men’s event, even with two back to back criterium races in his legs from Tuesday night’s Llandow races, Ieuan Andy Davies took the win in a fantastic time of 22 min and 37 seconds.  This was closely followed in second place by Danny Thorogood in 22 min and 54 seconds and Andrew Poole in 23 min and 26 seconds.

Jack Woolley, took the individual win in the road bike section with a strong time of 23 min and 45 seconds, with Chris McLean in second place in 25min and 41 seconds and Caron Pugh in third in 26 min and 29 seconds.

The women’s local time trial scene is growing in numbers and standard. A strong performance by Emma Palfrey earned her top spot on the podium in an excellent time of 26min and 30 seconds. Second place, a position she also secured at the Llandow criterium the evening before, went to Anita Saycell in 26 min and 46 seconds and 3rd place, again having competed at the Llandow criterium went to Shannon Haird in 30 mins and 18 seconds.

Next week the TT races return to the Cwm Rheidol 10 mile course. 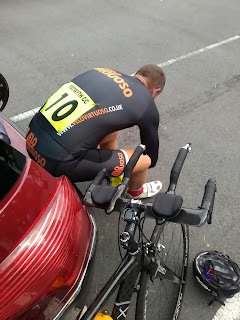