Jon Mould of JLT Condor sprinted for the win at Ystwyth CC’s early season Tour of the Mining Valleys in Aberystwyth, Ceredigion on Sunday 5th March 2017. The rain kept away for most of the race, but early morning downpours teamed with wind and low temperatures made for a challenging morning on the hills inland of the town.

Mould finished ahead of Issac Mundy of PMR@Toachim House in second, Edward Roberts of Team Elite in third, George Fox of Team Bottrill-HSS Hire in fourth, Daniel Bigham of Brother NRG Driverplan in fifth and Mould’s teammate at JLT Condor, Ed Laverack, securing sixth place, after a breakaway group left the peloton on the second lap.

The hilly profile of the 75-mile route, with three ascents of the New Cross climb followed by the sting in the tail, the 1 mile ascent of the climb from Pontrhydygroes to Devil’s Bridge, attracted a field of over 60 riders. Mould took the  prime prize for the ascent of the ’49er from Pontrhydygroes to Devil’s Bridge, with Edward Roberts securing the first prime on the second lap climb to New Cross and Zach May of Metaltek Kuota taking the second prime on the final ascent of New Cross.

Race winner Mould had already secured second place to teammate Ed Clancy at Saturday’s Eddie Soens Memorial at Aintree.
A full album of race photos, to be credited to Adam Hughes, can be seen at https://hugheses.smugmug.com/Adams-Photos/Tour-of-the-Mining-Valleys-2017/ The images below of Jon Mould sprinting for the line and celebrating his win are thanks to Kristian Bond.
Ystwyth CC would like to thank all riders and teams who made it to west Wales for the race, as well as Anthony Motors and all those who helped to make the race possible. Thanks are also due to the local supporters on the roadsides. 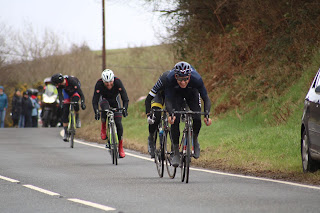 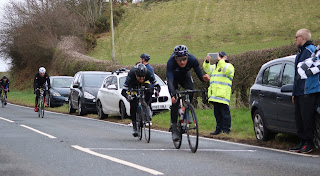